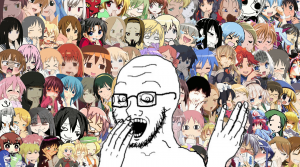 The tr/a/nime and manga board of 4chan. Overweight weebs use this board to argue about what underage character in their favorite Japanese children's cartoon is the best. Moot created /a/ along with /l/ on November 8th, 2003 in an attempt to contain the pedophiles on his site. Many of these pedophiles will falsely claim that 4chan is a pedophile website but this can easily be debunked by showing them that only a small fraction of the boards are dedicated to pedos since moot kicked out most of the ADTRW mods once 4chan got popular.

This cesspit is best known for the /dbs/ subculture. Some would argue DBS is an ESL spic tranime, but it's certainly better than the latest slice of life garbage the board is discussing that everyone will forget about in a month. During the last episodes of the final season the shitposting reached unprecedented levels of 5-6 threads dedicated to this shonenshit hitting the bump limit simultaneously.