An artificial soyduel (AS) is any duel simulated in a programming language like Python. Such an application may be used to practice duelling in a stress-free environment, to try new duel tactics, for recreational purposes, or as a substitute for real duels when one is banned or going without internet access. Artificial soyduels are not, however, recommended for learning the craft outright as their innate artificial nature cannot properly prepare a novice duellist for the curveballs that a real duel may throw at them, especially as they do not support images (regular nor ASCII). Only experience can allow one to "duel blind" without the need to see the 'jaks they wield.

Around the end of May 2021, janitors were ramping up their persecution of soyposters by arbitrarily and unwholesomely deleting any and all soy threads on /qa/. As much as half the board was purged during particularly bad flare ups.[1] On 30 May, 2021, the first recorded instance of an artificial soyduel was documented amid this backdrop in a thread discussing substitutes for soyduels.[2]

Provided below are lines of code that can generate such artificial soyduels in different programming languages.

These will generate a hundred generations of a duel about "though". If you want to play this AS you should make sure you have enough thoughjaks to pick out an appropriate image for every line. 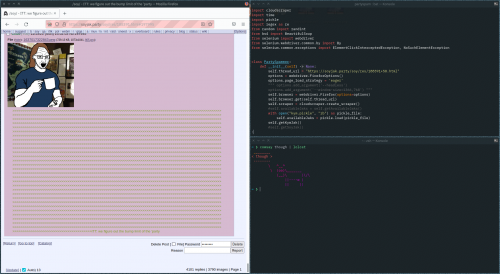 On November 9th 2021 an anonymous soyjak.party user made a thread to find out the actual bump limit of the site, he developed a python script that scrapes a booru, KYM or a GAN generated image and adds an arrow after each post.

Many considered this a huge leap in soydueling because this script was able to post and look for images automatically. As of November 18th 2021 this thread has over 5,100 images making it the longest soy duel ever known.[3]

On the 18th of November 2021, though the bump limit had not been reached, the thread got shadow locked. Every attempt at posting a reply resulted in a "Your request looks automated; Post discarded." error popup. Experts have theorized that the strain on the server forced Soot to shut the thread down, as it was quickly eating away at his weekly allowance and would soon require lowering the janitorial salary.

After several temporary locks, Soot finally locked the thread for good, which caused it die on November 30th 2021. In total, 6077 replies and 5619 images have been posted which makes it the largest soyduel to ever take place, and perhaps even the largest imageboard thread ever made.[4]

Moral questions have been raised over whether or not generating hundreds of 'jaks without bodies qualifies as a violation of their basic Soyjak Rights considering they have no means of eating the bugs or even attending black lives matter rallies.