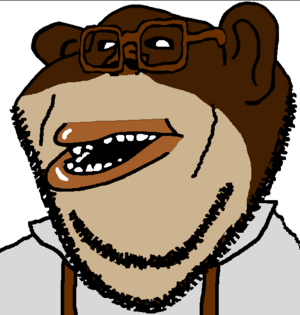 Not to be confused with Bobo the Bear, a 4cuck /biz/ mascot.

Bobo the Sharty Janny is the official mascot of Soyjak Party effective March 6, 2023.

On January 18, 2023, a soyteen made a thread where Soyjak.party/History was fed into an AI so it would give what would happen in the future. The AI wrote that Kuz will announce that soyjak.party is getting a new mascot called "Bobo the Sharty Janny" on February 15, 2023, then make him officially the mascot on March 6, 2023.[1] It is commonly used to reply to bait posts with a variation of the phrase "SMELLS LIKE BAIT" in reference to his slogan.

The same day, another thread was made where a 'teen went to ChatGPT and asked it what Bobo the Sharty Janny's slogan would be. ChatGPT responded with "The life of the party, the smell of the crowd."

He has already caused frogcucks to seethe and cope about his existence, securing his place as a Gem.

Bobo is supposed to be a monkey, due to the fact he has the exact same color palette as a chud monkey image on SoyBooru. Some also claim for him to be a bear due to coincidental naming and barely similar color scheme but someone claiming to be the creator has refuted this and snopes said it is false.