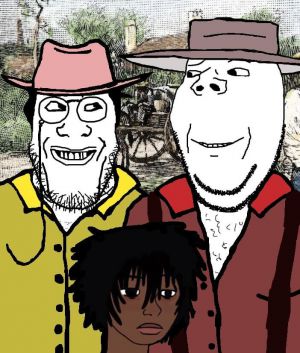 Buck Breaking is a 2021 documentary, directed by Tariq Nasheed. A black buck was a slang term for an unruly male slave, and breaking a buck meant using forced sexual intercourse to punish them. It is claimed that the practice of "buck breaking" eventually became so popular, that specialized "sex farms" were created, and that "African slaves were bred just for the purpose of being raped by their white masters".[2] Tariq added the claim that the emasculation of black men was transferred to their DNAs, and this is the cause of higher rates of homosexuality/transgenderism in black people.[3]

Note: at the time of writing, the movie is available on Youtube.[4] You WILL watch it, and you WILL post a review in the discussion page.

Note: Tariq Nasheed got assblasted and filed a copyright claim to shut it down

Update: Gem is back up! https://youtube.com/watch?v=o1bw1oNF0Q0

However, trusted sources (a post with two gold awards on Reddit) completely deboonked this claim. Here are some relevant excerpts.[5]

[T]here are absolutely grains of truth to the story, but the practice of "buck breaking" they're describing simply did not exist [...] the idea of it being a wide-spread phenomenon is really quite ludicrous when you consider the wider historical context. 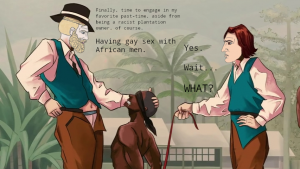 If you think this actually happened, you need to take your meds.

That is not say that male-on-male sexual abuse did not occur. It absolutely did - and the very fact that we have historical records testifying to it in a period so hostile to same-sex activity is quite significant.

That power and humiliation lay not only in the ability of slave owners to actually commit sexual assault against other men, but in the fact that they could do it, keep it a secret from a wider society that demonised same-sex activity, and get away with doing so.

The idea that 'festivities' revolving around male-on-male rape, involving a large number of white men in the upper echelons of southern society invited apparently to participate widely and freely, were a prominent part of slaveholding is really quite nonsensical. If nothing else the individuals involved would be exposing themselves to an incredible physical, legal and social risk, regardless of how prominent their status was in wider society.

Once the internet caught wind of the fact that Buck Breaking was a schizoid conspiracy theory, it was over. Posters began to mock how the director's intention more than backfired on him. Several people questioned how much Tariq, who is outspoken about his homophobic beliefs, had spent in commissioning the art of black men being dominated by white men, and raised questions as to whether the director may be a homosexual in denial.[6] Tariq's obssession with "bussy" goes as far back as 2017, according to one forum post.[7]

Several edits have been made, featuring black Soyjaks as bucks. 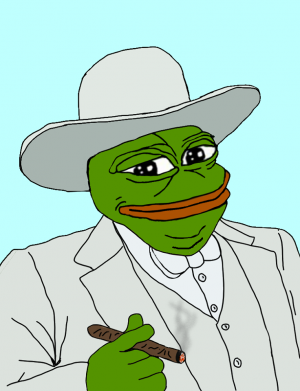 The image posted alongside the copypasta.

A copypasta narrating the story of a buck that was a "peculiar type", and much too eager to be broken, was posted on /tv/:[9]

>So we been breaking bucks for 3 generations.
>Mos' time the breaking sticks. The buck don't give you any kine uh problems.
>B b but sometimes, sometimes... well sometimes you get a PECULIAR buck.
>This one buck, well he was the peculiar type, he a uh, well he would act up but he wouldnt hide it.
>It seem every week he was pretending to take a nap on pickin duty( but with one eye open all koi like) or he'd take extra molasses pie, or or or he'd sit his field ass on the front porch.
>Every week he'd do somethin' rascally IN PLain damn sight of the OVaseeah.
>OVasseha would call out to the buck to get to the Breakin Barn. This Bucks eyes would light up and before you could whistle dixie, he'd be in the barn.
>This Buck would run to that breaking barn like it was a cool stream on a hot August day in Georgia.
>Hellll it got sooo bad this buck would TELL You what kine mischief he was gone get his midnight black ass into. He hadnt even DO nuthin yet..
>He would skip over to the barn after an call out " COME On MAaaaaSSA THIS BUCK AINT GUNNA BREAK HISSELF!"
>Just down right peculiar... 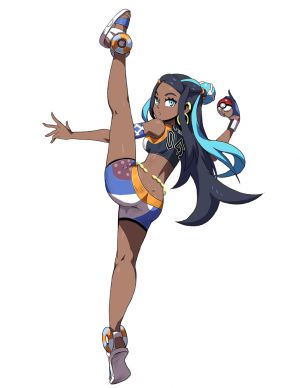 This copypasta is usally posted alongside tan anime girls.

Another copypasta was posted, this time featuring the breaking of a wench.

On your knees, wench. Someone shoulda broke you a long, long time ago. I have nary met a wench I can't chuck with this here long and mighty dingus! I tell ye back in aught-4 I met a real mean one. She had big, air stealing nostrils, monstrous, boot lips, muscles that rippled under her cobalt skin so it’d look like a nest’a snakes as she’d be twisting here and yonder. T’was an older gentleman, the owner d’ye ken?, that had hired me to break this particular wench. Was some half-dozen breakers what had tried and failed! I tracked this this big-assed sheboon, by fallerin’ the sounds of her impressive proud buttocks, clapping as she capered to and fro on yon gentleman’s land. There she be, proud as a damn peacock, black slave’s body framed by yon settin’ sun, just begging to be broke. I approached from the east, formerly westerly way. Took her unawares as she were sat alone out front a shack, mending a loincloth or some such. Knocking her to his glistening buttocks produced a thund’rus CLAP, and I mounted from the front. I tell ye girl, but that wench began to FIGHT! This unbroken, proud negress was ornery I tell ye, but I ain't ne'er been denied, d'ya ken it? I had my cock out in an instant as she scrambled onto her black belly and began ta’ wrigglin’ this way and that. And bucko did she began to wail! As loud as prairie lightning she were. This wench could tell the breaking was coming, and I tell ye, she did WENCH. This obstinate whore could turn on a dime and give ye some change! I tell ye as the winds were my witness, she were a right sunfish, struggling and flopping ass she did, gyrating her unbroken black pussy and dodging my breaker man’s meat. But she broke, and I finished the job. D’ye ken? That wench broke. Say sorry, wench. But they all break. By the man Jesus and his snowy white pappy, now say hallelujah, girl, you'll break, too![10]