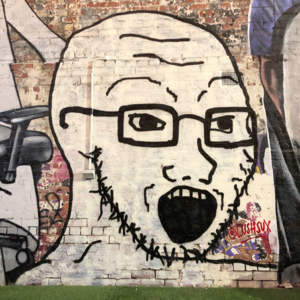 Graffiti is an illegal act of vandalism.[1] During the history of soyjak.party, some soyteens have made graffiti of various Soyjak related things. 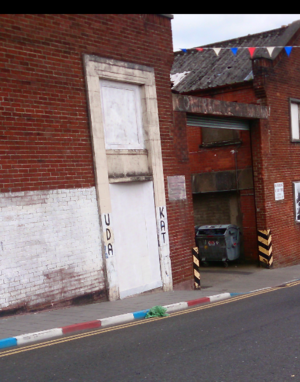 The photo that was formerly on Wikipedia. KAT = kill all taigs.

After Wikipedia deleted an image of some graffiti containing an image of an anti-Irish slur, some soyteens started Operation Taigjak. The original plan was to find the location that the original graffiti was located, then take a new photo (along with new graffiti of a soyjak in the frame). Later on, OP planned to go the library then print a photo of a 'jak instead, as well as borrowing someone's phone since he did not have one. The original thread died after the catalog got flooded with scat that night.[2]

On January 4, 2023, another soyteen started to graffiti different things, including pro-sharty and pro-Kuz messages. Despite Graffiti being illegal, the soyteen said that "I doubt anyone would get in trouble for it, it's as common as smoking in my town" and also that "me and my friend are the only known users of the sharty in my country probably." Later on, A 'teen requested that he graffiti "Taig," as a continuation of Operation Taigjak, [3] to which he did.[4] 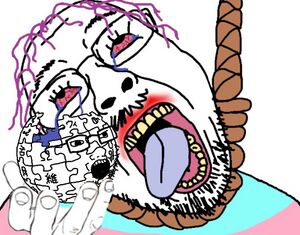 >serb who fixed the article here, im not a troon nor jar ty cuck, i just don't like seeing wikipedia vandalized, i think this operation is going a bit too far.

The image was later removed after someone snitched to Wikipedia admins.