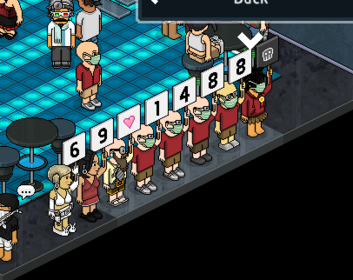 Habbo Raiding is a recreational activity in which 'jakkers gem it up with swastikas and 'jaks on habbo.com, causing the local population of oldfags and small children alike to seethe. Despite the game being 23 years old now, Habbo hotel continues to host a dwindling yet loyal playerbase of trannies and autists, most of which have joined in 2010.

Although masks are not required on Habbo, YOU WILL continue to mask up to stop digital COVID-19...or something.

On January 3rd, 2023, the first Habbo thread was made. It stated an offer to raid and even replace the culture in Habbo Hotel, citing that Habbo was a "dying game now and the only people who play it are mega autists trading furniture."

Raiding was unorganized at first. 'Teens had just begun to sign up for the first time, and dress code was conflicted between Soyjaks, Chudjaks, Ronnie McNutt, and even Nikocado. Bald soyjaks wearing plain white clothes was the standard dress code around this time, though not many had figured out about the facemask yet. After only 7 hours of raiding, dress code standardized to the bald, red shirted, glasses wearing, gemmy little science loving 'jakky that we know today. Another thread would be made on January 4th, 2023. While appearing to be a poorly received fail at first due to bans obtained yesterday and a lack of 'teens joining, it quickly picked up, garnering a total of ~200 replies before archiving. Soyteens mobilized across a variety of locations, including the Cafe, the Picnic and Club NX. Many gemmy things were done, such as achieving a 1488 sign line multiple times, harassing many users with female avatars by spamming OMGSISA, harassing random users in the picnic by calling them transphobic alongside a 'teen with a troonjak avatar, finding a girl with the name "Maya" and spam her about Ongezellig, sing multiple soy songs such as "Cobbo" by SixThrembo and "Dr. Fauci give us vaccines", went to a random room full of trannies and bring a nigger with an afro that harassed everyone until they all ragequit, and had very few 'teens warned or banned by the tranny jannies.

By the third and fourth threads, there was a standardized OP. Habbo Raiding was now in the sharty mainstream.

Talking about gems, coal, cobson, and asking people to mask up and get vaccinated is a surefire way to annoy the 2010 oldfags. They can still set you to ignore (letting them continue chatting as normal in their safe space, though they can still physically see you) or even report you to the jannies if you use too much chudspeak. For extra effect, you can crowd around the person in question. 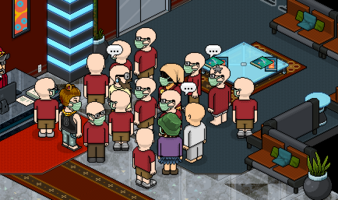 A perfectly formed 'ka in an empty room. Note the presence of NAS coal.

Swastikas, also known as swastigets and the 'swas, are the most difficult but rewarding chudding up to do in Habbo Hotel. A successful formation requires '17 teens, a 5x5 completely open space, and an insane amount of coordination. To start, make a plus formation, then extend the formation to create a swastika. Of note, a single stray teen or a wild oldfag can potentially ruin the formation.

Creating a "1488" is significantly easier than a swastika, as all you need is a small amount of 'teens and enough space to make a line.

Simply face the same direction, then right click yourself -> signs -> hold up a 1, 4, or an 8 depending on where you are in line. You will need to keep clicking the sign button, or else you will stop holding it. You can also do it without signs, by using the avatar creator to create a set of avatars with numbers on their back.

Much like the version with 4 'teens, you must face the same direction, right click yourself -> signs -> hold up a 1 or 4 depending on where you are in the line. After that, both 'teens switch to an 8, and return to their previous signs, cycling through the numbers.

While Habbo hasn't had real jannies since sometime around 2011,[1] they have outsourced their moderation load to shithole call centers to places like Costa Rica and Thailand. If the outsourced Indian can understand what has been typed in chat, then you can be banned. If you want to avoid being banned, ONLY stick to chudding it up with signs and using obscure, nonrude sharty slang. While an effective trolling technique, talking about having sex or bypassing nigger puts you at risk of being reported to the jannies, with one 'teen having even gotten an instant permaban by posting links to soyjak.party and claiming it had child porn in it.

You should probably wait out your ban, as they usually only last 24 hours. Habbo works with a gradual moderation system, so the more times you get banned for chudding it up, the longer you won't be able to chud it up. If your ban is a permaban or if you're feeling daring, you could attempt evading it by resetting your router or using Tuxler/Mysterium.

Where is everyone? Why are all the rooms not in English?[edit | edit source]

Habbo has international hotels (for example, habbo.es) and will attempt to get you into them if possible. If your IP is in a non English speaking country, directly connect to habbo.com/hotel to avoid joining the foreign hotels. 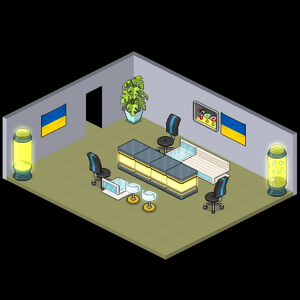 Welcome to /habbo/, where we raid Habbo Hotel or something