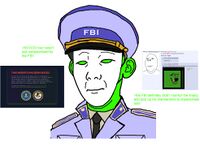 On the 9th of December, 2022, soyteens were met with a notice supposedly from the FBI that the site had been seized. There was immediate panic, and a thread was made on 4chan's /int/.[1] When soyteens refreshed the page again, they saw the sharty back to normal, with some new threads panicking about the seizure. Then they refreshed the site again and were met with a more official-looking seizure notice.
A few minutes later Kuz made everything normal again and made a post revealing that it was a prank. He was met with anger from soyteens. There are conspiracy theories that Kuz and the Kolyma Network was actually compromised by the FBI, and that the FBI has been monitoring the site to pick up on Kuz's mannerisms to impersonate him. This new fake Kuz is called Fednetsov, and it is theorised that the real Kuz has actually committed suicide with two bullets to the back of his head.
It has been suggested that George Floyd is now in control of Kuz's tripcode, and, just like his involvement in the Unpluggening, he is out to get the sharty.