Namefag is a term used to refer to users of imageboards such as 4chan and the 'party who have decided to ignore the default anonymity of the site by giving themselves a name or another distinguishing characteristic. Users who post images of the same fictional character (it could be from anything a videogame, anime, movie, show, book, etc) regardless of content are known as Avatarfags, while users who have unique tripcodes are known as Tripfags.

Namefaggotry and tripfaggotry is enabled by most imageboards, but the feature is widely disliked by the users because of how rife it is among trannies and attention-deprived losers, and because it's not permitted by the fucking oldchad culture. As a mechanic, posters can start a name/trip by entering one into the appropriate field in the reply form.

Tripfags are a subset of namefags who use unique password-hashed tripcodes so as to prevent impersonation by everyone without the password.

Despite being devised as a secure cryptographic signature, some based retards use custom tripcode generators such as Meriken's Tripcode Engine[1][2] to fish for a custom trip that spells their name or whatever sequence of characters they're willing to spend enough computational power on. Cool I guess? 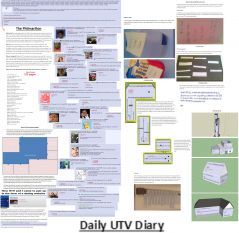 /sp/ tripfag UTV (!MjaFqpDkME) was advised to change his name and flee the country[3] after a mentally-ill gigachad stalker posted a massive diary and fanfic-infodump about him. Indeed, he stopped posting immediately after[4] and has never been heard from since.

Attaching a unique identifier to your every post is like publicly datamining yourself and is a good way to get stalked by schizos, but maybe that's the goal. Indeed, some tripfags seem to wish that they would be stalked.[5][6]

On the 'party[edit | edit source]