From Soyjak Wiki
Jump to navigationJump to search
Were you looking for the Mental Asylum? 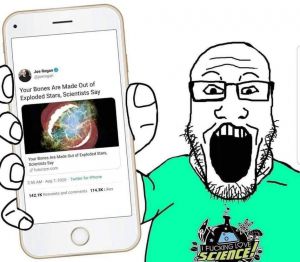 Science, also known as Soyence, is the de-facto religion of North America and Western Europe. Roughly 20% of the population of these regions pledge themselves to science.

Science derives from the Latin "scientia", meaning knowledge. This is ironical, as the teachings of Science have no basis in reality. Soyence is a combination between "soy" and "Science", commenting on how soyful the religion is.

The religion of Science dictates that the Earth is in fact a ball floating in mid-air, and that a force called "gravity" is what keeps the Australians from falling off. There is no evidence for this teaching, as historical records, early experiments by scientists (not the fanatical followers of this religion, but wise men seeking scientia, or knowledge) both clearly show the earth is a flat disk, sat upon two elephants, which stand upon a turtle. It is unknown what the origins of this "heliocentric" belief are, however many speculate it comes from an as of yet undiscovered form of mental illness.

Science preaches that life is utterly meaningless, and that we ought to all just kill ourselves.

Many rituals are done by Science worshippers, the most famous being: killing babies, stabbing new-borns, taking meds, eating bugs, drinking the soy, living in the pod, wearing the mask, clapping for health heroes and buying from conglomerates. It is believed that if these are not done then the North Pole will stop being ice, flooding everything. It is also believed that if scientific law, that is the rules set forth by the hierarchy, are disobeyed, the rain will dry up in some areas and flood others, devastating agriculture and killing millions.

It is unknown at what point Science gained control, but by 2020 Science was expected to be completely accepted by all civilians and followed devotedly. The earliest traces of "Science" can be found in the Prophet Aristarchus of Samos, who without evidence both claimed that the earth was round, and that it, along with the other "planets" orbited the sun.

Billionaires are the ruling elite of Science. Despite their usual lack of formal scientific training their word is unquestionable.

The second most powerful members of the hierarchy are priests called "Scientists", also known as "Soyentists". These Scientists often claim that they have evidence. The evidence however is usually in the form of long, meaningless lists of numbers and some diagrams, or contradicting photos of Earth from "space".

The lowest class of religious leaders are soyboys, especially soyfluencers. The soyboys use shaming and ostracization tactics in order to force civilians into bowing before the religion.

The Devil in Science[edit | edit source]

What is comparable to the devil in abrahamic religions is a broad spectrum or people, ideas, events, or organizations, these may include: