The Sommunity (Soy Community) is a term that broadly refers to those involved in the wider soyjak culture. Individuals are known as soy posters, soyteens, soybros, soyjakkers, soyniggers, 'jakkers, soyjak spammers, and derogatorily and erroneously, wojak spammers or "wojackers".

The Soy Community mainly gathers on the The Party, OnionsBooru, and the Soyjak Wiki, where you are right now. The /qa/ board on 4chan was formerly the central hub for the Soy Community during the Golden Age of Soy, and was where many Soy Duels and other many long-lasting trends originated of the Soyical Arts could be seen and even participated in. The latter board was infamous for its intermittent banwaves against soyposters, though, and it was eventually destroyed in the Great Soyset.

After soyjak originated on 4chan, a civilisation of early soy custodians arose to guide the new meme through its infancy.

Soyteens have been kicked out of 109 boards. This is due to widespread anti-soymitism and IS NOT our fault.

As the supposed[1] birthplace of soyjak, /int/ served as the first soyopolis throughout 2018. At this point, soyposting was still in its infancy and was still widely associated with Gigachad posting. 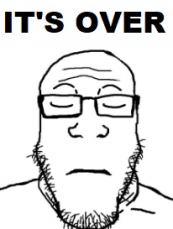 The /qa/ board was an ancient wasteland that had been long forgotten by 4chan's inhabitants by the time of Early Soyjak. As a meta board, it had few permanent inhabitants; and as an unlisted board, it had little moderation beyond serving as a dumping ground for off-topic threads—together, these two conditions made /qa/ a ripe candidate for a takeover by the proto-Soy Community.

By 2020, the soy colony on /qa/ had thorougly grown to the point that it eclipsed even /int/ as the main hub for the Soy Community on 4chan,[2][3][4] thus ushering in the Golden Age of Soy. However, even during this early time of prosperity, the weight of the Janny bore heavy and anti-soyjak banwaves were common.[5] Nonetheless, as a whole, soyteens flourished throughout 2021-21 and invented many long-lasting trends of the Soyical Arts. 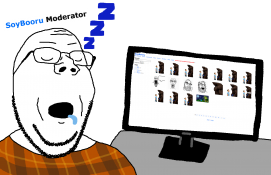 On November 3rd, 2021, jannies finally enacted Operation Clean Stable and descended upon /qa/, wiping every thread from the board before locking it forever in an event that is now known as the Great Soyset.

The first booru established by the Soy Community was primitive and deeply flawed in that most posts went untagged and it was hosted out of our control on booru.org. On August 25th, 2021, SoyBooru was purged by a booru admin due to light spam. This event permanently wiped out a huge portion of archival effort along with thousands of rare lost-media jaks.

Lost sheep of our lord and saviour soyjak.

Main article: The faces of party