This article is about the variant. For the individual, see the Swede (Artist)

Impish Soyak[sic] Ears, also known as The Swede, Swedish Win, Swedish Fail, Swedejak, and Impjak, is a 'jak variant based on an edit of Guinness World Record Soyjak. He has a shrunken head, a large mouth, a double chin, and various other discrepancies that distinguish him as his own variant. Impish Soyak Ears dropped to chaotic reception from the soyjak community, and it remains disputed whether it's a win or a fail. Despite often being used to portray Swedes, there is zero to no evidence that swedes actually look like this or say this.[1] There's a common misconception that this soyjak is called "Impish soyjak ears" but this isn't the case, since the swede named the original filename "Impish Soyak Ears", and he claims that his earred soyjaks are named soyaks rather than soyjaks.[2][3]

The evolution of Impish Soyak Ears.

On April 5th, 2021, he announced his first acting role as the lead character in Soyjak Party's first commerical webcomic, Impjak Adventure. When asked why he auditioned for the role, he told reporters that he "knew the material was gold". He later reprised his role as Impjak for both episodes of Impjak Adventure: The Animated Series, providing both voice and digital mo-cap.

During the Soyvil War, Impish Soyak Ears joined the Swedish faction due to his evolutionary relationship to Wholesomejak. However, some Impish posters pledged themselves to neutrality due to an unwillingness to fight on the same side as Deformed Soyjak.[6] 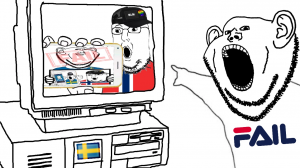 An example of a soyduel between a Swede and a Norwegian.

Norwegian posters have been uniformly outspoken in their opposition to Impish Soyak Ears due to his Swedish ancestry, and as such they generally consider him to be a "Swedish Fail". Norwegians also express serious doubts concerning the veracity of the "Swedish Win" infographic. Like most things in Scandinavia, these grievances are expressed via soyduel.

Posting any variation of Impish Soyak Ears is a criminal offence in the Kingdom of Norway.

On July 9th, 2021, Impish Soyak Ears accepeted an offer by the Pennsylvania Tourism Department to star in a series of poster advertisements.[7] He later moved to Amish country in a failed attempt to recolonise the area for Sweden.[8][9][10][11]

On September 4th, 2021, he held a funeral service for trannyjak, who had tragically taken her own life by jumping from Impjak's windmill.[12]

On January 26, 2022, Impish Soyak Ears was implicated in the now-infamous dancing swede.mp4 video.