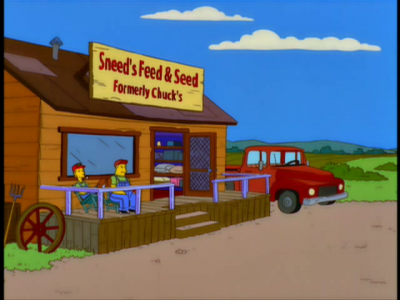 Sneed's Feed and Seed (Formerly Chuck's). The two farmers can be seen here.

Sneed's Feed and Seed (Formerly Chuck's) is an authentic rustic convenience store selling farm and animal supplies on the outskirts of Springfield, Ohio. The cashier and the two farmers who sit outside the shop are collectively known as Sneed, though the farmers are sometimes referred to as Farmer 1 and Farmer 2. The joke of the store's name is that the store was formerly Chuck's Feed and Seed, and Chuck does not rhyme with Feed or Seed, meaning the current name's rhyme is a complete coincidence.

In conclusion, the sign is a subtle joke. The shop is called "Sneed's Feed & Seed", where feed and seed both end in the sound "-eed", thus rhyming with the name of the owner, Sneed. The sign says that the shop was "Formerly Chuck's", implying that the two words beginning with "F" and "S" would have ended with "-uck", rhyming with "Chuck". So, when Chuck owned the shop, it would have been called "Chuck's Feeduck and Seeduck" or "Chuck's Fuck and Suck.

One of the first memes about Sneed and his store was centered around users on 4channel's /tv/ board posting an image of Sneed's Feed and Seed and claiming that they did not understand the joke.[3] This joke proved prophetic on November 12, 2019, with the launch of Disney Plus and the subsequent discovery that the older Simpsons episodes had been poorly cropped, and that many visual gags, such as Sneed's Feed and Seed, were not discernible.[4][5]