This page, ironically, is a gem. 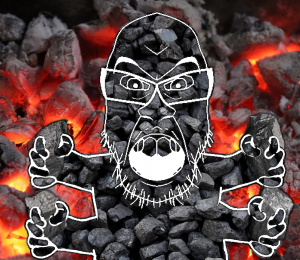 For Soyjak Wiki's designation of and policy on low-quality articles, see: Soyjak Wiki:Coal 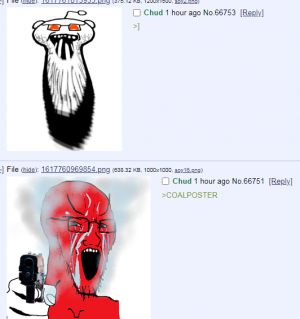 Coal, otherwise known as Coalposts[nobody says this][1], derives its name from the real coal rock. Coal is known to be the opposite of gem on places like Soyjak.party. Unlike gems, which are high quality and uncommon; and the average post, which is wholly average and neither coal nor gem; your average coalpost is a special combination of low quality and low effort. Coal does not serve any use for the community other than to occupy space that could have been a gem, making watchersby hopelessly lament what could have been. Coal is doubly detrimental because it floods gems off the board to be forever lost to continuous coal spam.

Coalposters as a group and their ultimate goal[edit | edit source]

Another example of a COALLY coal thread

Attempt to imagine a low human, can you imagine that? Then imagine someone even lower and then even lower and that's your average Coalposter. Coalposters are huge incels deprived of any sexual activity with broken dopamine receptors and their only form of entertainment is the sadistic pleasure of ruining the fun of others, they attempt to destroy any community with their techniques and leave a former husk of itself for their sick minds and jerk off to the idea after. Coalposters can emulate various personality traits and identities. Coalposters are often troons or redditors and post in an attempt to emulate the 'jakkers which most often results in coal threads and the ruining of 'jak's reputation. Coalposter usually feature low effort threads containing an irrelevant quote or a 'jak unaccompanied by any text. When you see a coalposter make sure to say "coal burned", but do not reply to their post and make sure to sage their thread. The lack of (you)s and reaction will naturally drive away any reddit troons as without a constant supply of dopamine hits from attention, they will wither and die. Coalposters are a threat to the survival of soy culture.

As of recent weeks Coalposters have targeted Soyjak.party in an attempt of lowering the quality of soy posts in the imageboard site with creativity-less thoughtless posts, their strategy is to make the general community imitate their actions and begin posting low quality content and in turn transform what was known as soy culture as nothing but a soulless version of its former self, making SOOT decide that the website is not worthy anymore of hosting and thus shut it down. Although Coalposters and their techniques can be hard to spot at times this one is very obvious and this has surprised Coalposters that someone finally saw through their plan as seen in the image above. 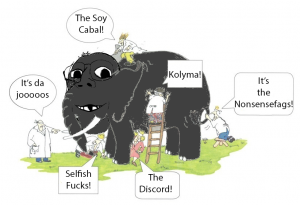 Stonetoss weighs in on the coaler threat

To combat Coalposters it's advised to create Gems as fast as you can or bump old gems and not let the Coalposters archive what would be otherwise precious soy culture, Soyjak.party is at war and it needs your help.