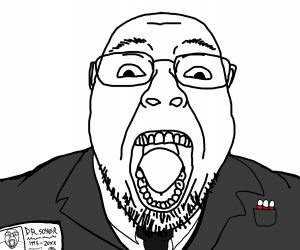 Dr. Soyer is a doctor and security guard employed at the Mental Asylum. Despite his medical qualifications, Soyer's primary role is as an armed orderly who guards the Asylum's more dangerous patients and defends the Asylum from outside foes, such as Fingerboys. He can be distinguished from other staff by his grey coat and tie, and the three shotgun shells he keeps in his left breast pocket. His name tag indicates that he has been working at the Asylum since 1995.