From Soyjak Wiki
Jump to navigationJump to search
The server is located at mc.soyjak.party. YOU WILL play on it!

After the shutdown of the official Sootcraft server, which died in darkness, the 'party was left without an official server.

the 'craft. One of the only images of the server to exist.

On August 4, 2022, the 'craft was created, a non-cracked 1.16.4 server. The server itself only lasted a day before being shut down due to someone loading loads of chunks.[2]

Very few images of the server exist, and according to Kuz, it cost him 300 dollars to repair everything.[3] 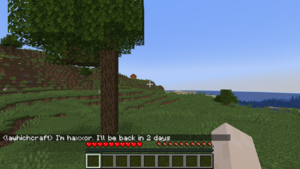 A l33t haxxor joins the Soycraft server on November 2nd.

On November 2, 2022, an announcement with the text "The Minecraft server will return on November 4rd[sic]" was made. A poll was attached to the announcement to determine the version. Although 1.5 won by 40% of the vote, another announcement was made with stating "Since you selfish little fucks spammed the vote its going to be 1.19" [5]

The server was later changed to 1.18.2. We do not talk about why this change was made. In fact, the paragraph above doesn't exist and never existed.

Although the server officially opened on November 4, 2022 at 9:00pm EDT, the server itself was joinable since November 2nd if you were to connect to mc.soyjak.party.

the 'eed is cracked

Click to be brought to a seed viewer so you can see where all the 'tructures are.

Currently, spawn is walled off with unbreakable blocks. If you wish to leave the fenced area, download a hacked client and fly out or yell for the mods.

YOU WILL ATTACH MORE COORDINATES, AND YOU WILL PROVIDE PICTURES FOR SOME OF THE THINGS AT THE COORDINATES! schizo_bleeding_feraljak5.png 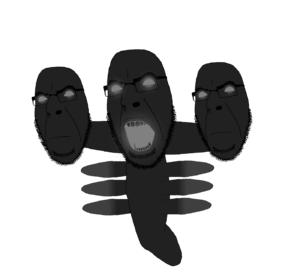 A rare depiction of the withercobs

The server's spawnpoint. Was lavacasted at a point. A signular nether portal, ruined aquarium, and a train station used to exist here. It was later griefed down to bedrock by a 12 year old with the name "nigger." Kuz cleared his inventory and his chunks, which were filled with duped TNT. Don't ever go here. Go far-far away. Today, the spawn is somewhat survivable, although it is filled with "god tier wojack" and "HWABAG" withers which make escape difficult. There is also a large obsidian wall along the north side, and the surrounding terrain has been decimated by war and lavacasting.

The spawn area on the very first day. http://files.soyjak.wiki/Soycraft/SpawnDay1.zip

Old spawn after a minor grief (a missing chunk is located at spawn due to a bug in the scraping program): http://files.soyjak.wiki/Soycraft/SpawnMostlyIntactEarly2.zip

A ruined village which was burnt down by kuz on the first day. After being rebuilt, its notable landmarks included the Church of St Chud, which was used to burn items that were stolen from other players as well as a stonecutter. The village was destroyed when a wither was summoned there.

It was later partially rebuilt and had a train line from spawn.

Chudtown was then griefed again, all that is left are the ruins of the once vast town. THOUGH, a new altar is being rebuild unknown location.

A base located at X1488 Z1488. Was later griefed by trolls from splinter sites who were enacting a one-sided war. 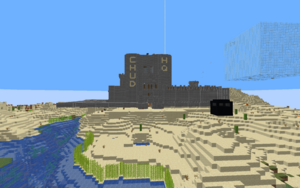 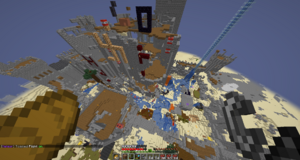 The Chud HQ is the new megabase of the day 1 soyteens who built the very 1st 1488 base. They left because some offsite selfish little fuck set fire to the base, which was 95 percent wood. The base was reduced to little more than a foundation with chests and glass panes floating above it. Leadership of the group of chuds and slaves who settled 1488 naturally came from Fwambaby who was already planning their next base, Chud HQ. Chud HQ is a base planned by Fwambaby. It consists of a commendably large castle of stone bricks, with floors of fireproof spruce slabs. Much of the chuds time in the first week was spent gathering stone and fuel to build it. The castle itself is quite empty, all activity is in the courtyard. With all the necessities such as a storage building and vaccine dispensary. It has been raided once by an Italian larper, who destroyed all of the items in its storage with lava, leaving them only what was on their person to go on. The chuds then shifted to an enderchest based personal storage system for each of their valuables. His attacks were put to an end when he waltzed into the courtyard naked, in front of several chuds, who proceeded to inflict TND on the intruder. Much work afterwards was dedicated to finding his bed and destroying/bedtrapping it. For this reason chud HQ has grown wary of sharing its location, though it still always welcomes teens who manage to make their way to it. There are a couple splinter builds which are around chud HQ. Goob1488's tower is across the river from the castles front where it is lined by swastika trimmed hedges. There is a police officer statue as well as an Israeli flag on the sides of the entrance. There is also a temple to Moloch by the path to the castles gates and a domed TND temple deep underground in dripstone lava cave. A small acacia house is to the left of the castle and is of unknown ownership. Looking down on the castle from its right is the Giant Nigger, who stands above a submissive cobson snowbunny who's so horny that he'll wet himself at the press of a button. Somewhat adjacent from the base is Goob's own, where there is a raid farm. There has been great effort to set up an exp farm in the end from chuds. There currently is an ongoing effort to fix and prevent further damage to spawn which is expected make more newteens join.

Griefed on December 17, 2022. The culprit was assumed to be Jakobodachocobo.

A version of Chud HQ from before the grief can be found here: https://files.soyjak.wiki/Soycraft/ChudHQ.zip (ChudHQ was located at X8888 Z8888. This world dump leaves you at a nearby jungle castle. You can easily get to the main part of ChudHQ by switching your gamemode to creative and flying over there or by just teleporting.) 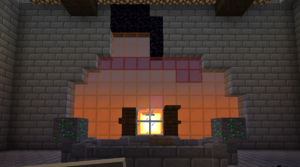 sunset at the 'cado coinshot

As of November 20, 2022 spawn has been "cleaned up" by teens, who created a large obsidian platform topped by one layer of grass. A couple days later, a player named Soyjakparty traveled to spawn and elected to remain there, to situate newly entering players with free diamond gear. Note that this only happened because a new user (abucobson) serendipitously logged in for the first time just as Soyjakparty arrived at spawn. With a newteen helper, Soyjakparty committed fully to developing spawn. 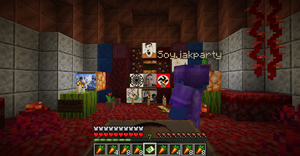 The first building erected being "The Temple" or "Soylimpus". The temple is a a quite large stone brick pantheon with quartz pillars, large beams of wood in a diorite ceiling, and a tower domed with copper on top. The back of the building looks out from the edge of the platform with a pulpit in front of a giant stained glass window painting of Nikocado Avocado's coinslot. The sun rises through the doorway, and sets in the coinslot. There is also a secret room within the domed tower, accessible by a discreet staircase to the right. Within this tower is a shrine to Saint Crusius himself. Bathed in a militaristic red are watermelons, swastikas, a tithing box, and pictures representing Chud and that which he fought for, all surrounding a candled alter with his likeness placed at its heart. Soyteens are encouraged to tithe at this shrine at least once for good luck. The temple itself is quite roomy, the church congregation being at the end, and an enchanting or vaccine brewing station set at either side of the entrance. Brilliant banners of the Nazi and Israeli flags drape the pillared entrance. Said pillars are decorated with portraits of significant sharty figures such as Nikocado, Kuz+Soot making love, Cobson, and Frognigger (dead). Spawn is in a small unbreakable house, while a larger storage shack made by the initial renovators was reappropriated as a storage for newteens. On one side is a small grove filled with beehives (buggies are sacred in shartyspawn culture). An extensive farm dominates the eastern end, as well as a pile of coal with a sign stating it as "the sharty", and a super science powered automatic compostor... or something. On the other side there is also a "cobby on the 'log". A few small structures/houses are built on the spawn island too. Beyond the garden is the big waterfall teens use to get down from spawn. Beside it is a soysand science powered elevator, which carries players up it surprisingly fast. At the base of the waterfall is a growing pod village made by Soyjakparty by vaccinating villagers, to provide a source of the diamond gear needed for newcomers. Above the village and spawn float an obsidian tyrannosaurus skull and a mysterious red building... as well the word "nigger" written in the sky. Spawn island's only permanent inhabitant is a zoglin named "whiter than u".