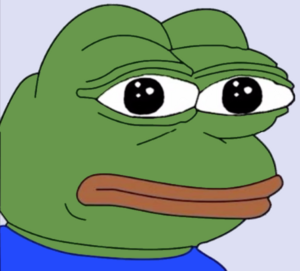 Pepe the Frog, also known by a few as the Grinch, is a fictional character best known for having a vaguely-stilted neutral pose, which can be interpreted as a wide spectrum of emotions. This is similar to Doge, Wojak or the Mona Lisa (unironically). Pepe's nonspecific emotion makes him suitable as a generic reaction image and as the mandatory thread-starting image that is required by most imageboards, giving rise to the phrase "What does the reddit frog have to do with this".

Pepe came from some webcomic nobody gives a shit about.

great thread man, can't wait to see where this one takes us

Frogposters are a group of 4chan users who routinely post Pepe to the point of obsession.[1] They are commonly accused of making low-quality[2]or nonsensical posts, and are often criticized for being whiny.[3] Their ultimate motive is unknown, but we hope it is benevolent.

Frogposters and 'jakkers have traditionally expressed solidarity as they are both 4chan outcasts (outcasts doe pepe posts make up half of 4cuck’s activity).[4][5]

Due to the fact that Pepe is such a broad image with little expectation of being related to the post material, Soyteens sometimes make soy-related posts on /bant/ using Pepe[6] in order to survive deletion by janny because, like Cirno, jannies do not consider Pepe spam. This development has been criticised by frogposters.[7]

On January 8th, 2022, a frogposter on /g/ admitted to reporting The Party for CP (which he totally didn't post himself) and successfully getting it taken down.[8][9] Soot later corroborated his story, confirming it to be true. This almost broke the long-lasting detente between the two groups, particularly as some frogposters seemed to celebrate it[10][11] as a "total frogposter victory".[12] Since then, the relations have been very tense. With some forgiving them, and others totally distrusting them and calling him by the nickname of Redditfrog.[13][14] 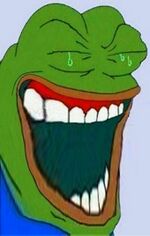 Sometime in October 2022, a rather persistent and annoying group of frogcoalers started spamming an image of Pepe laughing in bait threads, trying to mock 'teens with demoralization garbage. Interestingly enough many of those demoralization posts were clearly false flags by the laughing Pepe cabal itself. It is widely accepted that these posters, eventually dubbed as Frogniggers, come from the Pepe themed image board Frenschan. Frognigger activity has led to a ubiquitous disdain towards Pepe on the sharty.

As expected many of these frogSHITTERS are retarded enough to use the steganographically compromised pepes, as expected of frogSHITTERS. 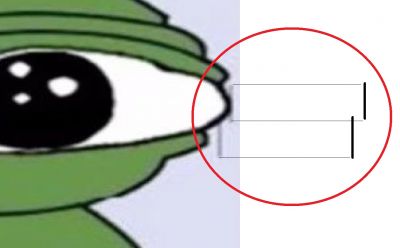 They appear below the pupils.

An easily-missed feature of every Pepe is the pair of identifying lines below the left eye. It is highly improbable that these strips are mere compression artifacts as they have been stamped on every instance of the most common Pepe in the exact same manner, and there is seemingly no reason for a compression algorithm to do this; besides, the strips exist even on image formats that don't use compression. The strips are likely a steganographic technique to embed hidden data within every Pepe. It is unknown what data is embedded on the Pepes, but it is likely a means to track the spread and evolution of the wider Pepe meme.

The steganography strips appear solely but uniformly on the most common Pepe variety on the internet, the 976x850. This is the variety featured at the top of this article. The 976x850 originates from a 2016 news article by the BBC, for which it owes its potency—such coverage by such a large news organisation has made the image the first result for "pepe the frog" and the second result for "pepe" on Google images; the first result (the 780x438 "pepefroggie.jpg" from KYM) does not have the strips; however, this variant is used much less frequently[15] likely due to its uncomfortable rectangular proportions, especially when compared to the squarish British Broadcasting Corporation image which is much more suited for forum posts.[16]

Along with Wojaks, Pepe and its variations are by far the most popular images posted on 4chan,[17][18] with tens of thousands exchanged every year. The only organisations capable of sifting through whatever data provided by the steganography built into every Pepe are that on the scale of world governments. Considering the common source of all steganographically-compromised Pepe images is the British Broadcasting Corporation, it is likely that the British state is behind this operation. This points to the conclusion that the steganography strips are a British covert intelligence operation to monitor the spread and evolution of Pepe as a meme—this, in turn, ultimately suggests involvement by Richard Dawkins, a high-ranking British officer within the "Science State", who proposed the theory of memes and how they spread in his book The Selfish Gene (1976).[19] 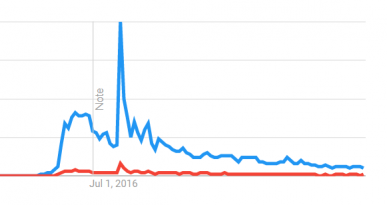 "Pepe the frog" in blue; "Pepe the frog meme" in red.[20] Both reached their all-time peaks in September 2016, the same month that the "most common Pepe" entered circulation. Note: This data comes from Google, who may have obfuscated the numbers to hide the truth.

Steganographically-compromised Pepes first began to spread on September 28th, 2016, when the British Broadcasting Corporation posted their article featuring the first stripped Pepe. This was around the time when interest in Pepe was at the highest point it had ever been and has ever been since, mostly down to the meme becoming an issue in the US Presidental Election following a Twitter post by Donald Trump,[21] which was subsequently matched by the ADL branding Pepe a hate symbol. This string of high-profile political controversies featuring Pepe may have been an artificial campaign to prepare the ground for the coming steganographic datamining operation. This also coincides with the 4chan concept of /pol/ "election tourists", which itself hints at even greater astroturfing.

It is probable that the British state was aided in this operation by the CIA and other Five Eyes intelligence organisations, especially considering the role played by the US Presidential Election; however, this cannot be decisively confirmed.

The technical details behind the steganography strips on Pepe images are still largely unknown, but it is likely that they mark a small, virtually imperceptible piece of data on the image file that can later be extracted and used to trace its origin and spread by those with the proper decryption key. There are various methods for implementing digital watermarking, including least significant bit (LSB) insertion, spread spectrum, and discrete cosine transform. The data itself likely contains include information such as the location and time of the image's creation and dissemination, as well as any metadata associated with it.

It is possible that the steganography strips visible on Pepe images are simply a visual marker for the presence of the hidden data, and do not actually contain any of the data themselves. Alternatively, the strips could potentially contain a smaller amount of data, such as a key or code needed to access the larger, more complex data embedded within the image.

It is unclear how the data is extracted from the Pepes. It is likely that the British state or other government agencies have access to sophisticated software and algorithms that can analyze the steganography strips and extract the hidden information. This data is then used to track the spread and evolution of the Pepe meme, as well as gather insights into online communities and cultural trends. 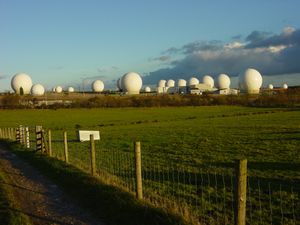 Although the Pepe steganography project itself was rolled out in 2016 and therefore was not mentioned in the 2013 Global surveillance disclosures, the leaks do mention a number of predecessors to such a program, including:

As part of a wider conspiracy[edit | edit source]

If the British government was indeed collecting and analyzing data on internet memes as far back as 2008, as the Snowden leaks seem to suggest, it is possible that the steganography strips on Pepe images were part of a larger effort to track and monitor the spread of memes on the internet. This means that the British government, and by extension the rest of Five Eyes, has been interested in the role of memes in shaping public opinion and political discourse for a significant amount of time. Whether this data is being used for nefarious purposes or simply for academic study remains unknown, but the presence of these strips on every instance of the most common Pepe suggests a level of organization and coordination beyond the national level.

In October 2020, a group of individuals were arrested for conspiring to kidnap Michigan Governor Gretchen Whitmer. It was later revealed that many of the individuals involved in the plot had been avid 4chan users, and routinely shared Pepe memes with each other, including the 976x850 variety with the steganography strips. Through the use of these strips, the FBI was able to track the spread and evolution of the plot as it developed, including identifying key players and their involvement in the conspiracy.

It is possible that the strips have been used for similar purposes in the past, and that the use of "weaponized steganography" to target individual groups is more widespread than previously thought.

In conclusion, don't download the BBC pepe. You should also block MD5-hashes of compromised pepes just to be safe.

On September 12th, 2016, the femoid Benghazi Butcher Hillary Clinton released a blogpost in which she criticised Pepe for being "sinister".[22]