This page is coal or something; you WILL help by expanding it. 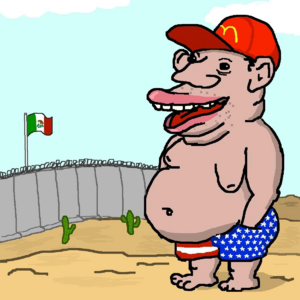 >Ronald McDonald is the president or something

Amerimutt is a forced meme from /soy/, or something. The meme itself is a direct deviation of the Le 56% Face meme from /pol/, or whatever. Amerimutt is known to be a high school dropout and highly illiterate in regards to politics, geography, technology, etc. Amerimutt is also known to have millions of reward points with McDonald's, as he goes there multiple times a day or something along those lines.

Most mutt spam has a format of the aforementioned picture along with with a strawman stereotypical American statement, then ending with "or something" or "or whatever" or something along these lines.[1] Due to its common and repetitive usage, there has been discussion to ban mutt spam on /soy/, or something like that.[2]

There's also a retarded chud that responds to mutt spam. He will never be Lee.

chad mutt discussing with a regular mutt, two swedemutts facing eachother, and so and so

You shall use the Queen's English.

A subvariant of amerimutt dedicated to making fun of brits, as I reckon. Based off the eternal anglo, another /pol/ meme, or so I've been told.