Soyjak is a high quality, well drawn edit of the classic Wojak meme as a Soy Boy. His characteristic features are his glasses, scraggly beard, and usually wide open mouth. The wide-mouthed expression he often has is known as the "Soylent Grin", and usually indicates that he is happy. He's also the gem that started it all.

Soyjak in his most well-known form, the "classic soyjak variant", was first posted to /int/ by a Swede on December 30th, 2017.[1] (swedish win btw) 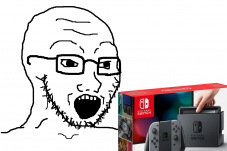 On September 1 2021, Soyjak historians on /qa/ unearthed bombshell evidence that called into question everything we know about the origin of Soyjak by discovering possible "first jak" candidates which pre-dated the timescale for the previously-accepted "Out of Swedish Win" theory.[2]

As of 2023, research into this topic is still ongoing.

As an art form[edit | edit source]

Although the concept of soyjakkery is requently dismissed as strawmen arguments by the normalfag masses and criticized by the trannies, 'jakking and it's culture has been acknowledged by some chads and other spectators as a form of subversive commentary on modern human nature, as well as expressionist and sometimes (as the CIA will term it) surrealist art - in particular regard to its following and wide variety of images and their literary contexts produced as result.

Soyjak was born in San Francisco, California, in a polyamorous omnisexual household. Throughout his life, he always happily took whatever meds he was prescribed by Dr. Soyberg, washed down with soymilk. He was fed processed, microwaved and frozen food with poor nutrition as a child, which is the reason he has fucked up hormones and is 5'1 (155 cm) in height today.

He still resides in California today, married to his wife, Megan - but only for the satisfaction of being able to watch his good friend, Tyrone Shaquan-Demichels fuck her 24/7. Together they had a mixed-race child named Malik Shaquan-Demichels whom Soyjak raises like a son of his own