Nojak is an organic 💎GEM💎 spouting an open mouth and false excitement.

Nojak was first posted on October 6, 2021,[1] making it one of the newest variants as well as the last to originate from /qa/ before The Great Soyset. It was traced allegedly by a Serb from a YouTube thumbnail uploaded by the Oreo Review Show. Nojak received mixed reviews upon his release on /qa/[2], and is currently considered to be forced coal by most 'jakkers.

Even though the original name was Nujak, it was changed to Nojak by booru admin as a variant with that name already existed. 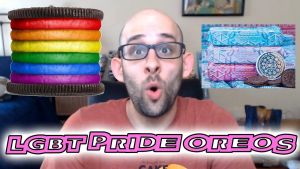 Thumbnail from which Nojak was traced

Many well-informed and intelligent people are of opinion that Nojak is coal because of his unusual eyebrows and square features, including his eyes and other details that were clearly drawn with the straight line tool. Additionally, his usually thick stubble makes coloring his face with a bucket tool complicated.

After the initial few /qa/ edits, most of the Nojak variants were low-quality dust that was spammed by a few dedicated chuds on the sharty, which in turn made hate for Nojak even greater. Some people have gotten used to Nojak, while others still consider him NAS charcoal.

Oreo Review Show is a YouTube channel run by (((Jonathan Estis))), from whom Nojak was traced. Nojak uses this channel to upload his genre-redefining, trope-subverting, culturally relevant, thought-provoking, socially-aware high-brow critiques of Oreo cookies to an audience of a couple hundred viewers.

In a video uploaded on 24th Janurary, 2022, Estis acknowledged the soy community and thanked us for adapting his likeness into such a well-written character.[3]

On March 2, 2022, Jonathan from the Oreo Review Show (yes, THE nojak) made an AMA thread on /soy/. Initially, he refused to post proof that it is him, later citing that a "message board built around the foundation of anonymity loses its shit that someone won't post concrete proof of their identity" After extensive questioning by soijakkers, Nojak "proved" that it was him by screenshotting his channel dashboard. when told that it could've easily been faked and asked to provide a recording of him refreshing the page, he continuously refused to do so. He was not using a trip initially, so its almost impossible to tell if any of the nojaks are the real deal thoughever. Eventually, nojak claimed the trip "nojak !!sR3lIQVdVg" around the end of the threads lifespan, leading to doubts that it's actually the real nojak despite he talk like him. The thread eventually devolved into a brutal soyduel.

"Nojak" answered many questions in the thread, remarking that: