Chugsjak is a soyjak traced from an image of BadlandsChugs, with open eyes added in. His expression is described as angry and roaring. He is widely regarded as the greatest rival to Cobson, and is used against trooncord spammers and pedophiles. Chugsjak also represents and makes fun of fatasses. 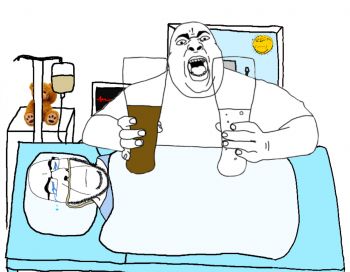 On September 22nd, 2022, a thread was made on /soy/ calling for someone to trace an image of BadlandsChugs that had his mouth agape, looking like a soyjak.[1] The first reply to this thread was “This could be the gem that finally puts shitson in the bin if someone does a high quality trace”. Thus, the soon-to-be Chugsjak was given a purpose.

2 days later, a soyteen responded with Chugsjak. A meltdown then ensued, where a Cobson poster spammed Cobsons to prevent anyone from seeing Chugsjak. A dedicated thread was then made for him, where the same Cobson poster seethed.[2]

Immediately, as soon as it released, Chugsjak went on a crusade. 13 variants of him were made in the first hour alone. To make that more impressive, in this first hour the Americans were asleep and few Europeans had woken up. On /soy/, a colorjak variant got the 1155555 GET.[3]

As the Europeans and Americans woke up, Chugsjak only grew more powerful. Cobson posters from trooncord began spreading a rumour that Chugsjak originated from discord. This has been considered slimy and pathetic.

During the September 24th Soot Q&A, Soot stated that Chugsjak “looks alright”.[4] In the same thread, he also denounced Cobson. This has been regarded as a Chugsjak victory.

On the Booru, Chugsjak posts without stubble were considered NAS and were deleted, including the first Chugsjaks.

Despite his crazed appearance, Chugsjak is usually very nice and calm, only wanting nothing but peace for all non-degenerate 'jakkers.

He chugs the world, 1 bottle at a time.

He is the heaviest soyjak in terms of weight, and is also one of the largest, even ignoring his titanic torso.

His toilet, bed, and all of his chairs need to be industrially reinforced with carbon nanotubes.