Wholesome Soyjak is a common subvariant of the Guinness World Record Soyjak who wears a trimmed beard, sometimes has no eyebrows, and is usually smiling. He is generally portrayed as benevolent and kind. This variant is often used to express or point out simple happiness or joy.[1] [2] [3] Sometimes, however, his wholesome nature is subverted entirely and he is shown performing bad deeds.[4] This is shown most frequently in the "ominous" version of Wholesome Soyjak, who is seen cloaked in shadow at all times. 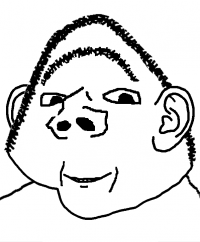 Ishish Soyak Ears is a variant of the Wholesome Soyjak with large eyes, a large nose, a small mouth, trimmed hair, a monobrow and, as the name would imply, a pair of ears. It was created by the same Swedish anon who created the original Soyjak and Impish Soyjak Ears. [6]