Are you sure that it's just getting started? Because my peer-reviewed studies indicate that IT'S OVER.

Are you sure that it's over? Because my sources indicate that it's just getting started. 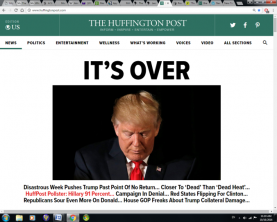 IT'S OVER is a meme buzzword that has been adapted for use in Soyjaks. The original phrase/meme was created by the Huffington Post during the 2016 United States presidential election.[2] They predicted that "IT'S OVER" for Donald Trump (he's going to lose ). The anons on the /pol/ board on 4chan parodied this by creating "IT'S JOEVER", a similar format but instead implying "IT'S OVER" for Joe Biden. The phrase did NOT become popular in 'jak culture when Soot posted the "IT'S OVER" format with a Markiplier Soyjak, after a /qa/ soywipe. The format has been used with many soyjak variants, such as Impish Soyak Ears and Eat The Bugs Soyjak.

To be researched: Other soyjaks using this format. Can (You) help us?