4chan is an American public toilet created in 2003. 4chan is the only English anonymous BBS anyone cares about and has spawned epic memes no one likes such as DESU.

The site was originally created for Moot's group of weeb friends he had from ADTRW. the website was created from translating the source code of futuba channel into English.

The first board was /b/ - Anime/Random, cementing 4chan's role as a public shitting street. Some silly people will claim that 4chan and imageboards as a whole shouldn't be exclusively for shitposts, but they are very dumb. 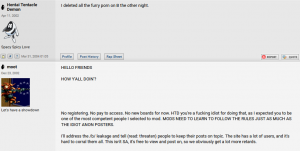 moot declaring that 4chan is retard-friendly 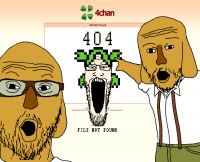 The main positions among 4chan's moderation staff are moderators ("mods") and janitors ("jannies"). Moderators can delete threads as well as ban users. Janitors can only delete threads and send ban requests to the moderators. Neither mods nor jannies receive any type of compensation for the countless hours of "hard" work they put into the site with the exception of a few high level staff members which Hiro gives a few soicoins to every month out of pity. Mods spend most of their time in the irc and discord erping with each other and only show up to actually moderate once they get sick of banning people who complain about the state of their dying website from the irc for interrupting their jerk ses.

The moderation of 4chan has become subject to controversy. Innocent funposters, including appreciators of soyjaks, have become increasingly persecuted by the members of the moderation staff. Many of these persecuted users have taken refuge in communities such as soyjak.party.

There are multiple methods to ban evade on 4chan such as: