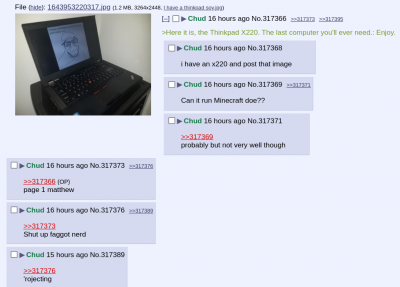 Screenshot from an imageboard

Imageboards are a discussion medium invented by some basement dwelling jap in the 90's. The premise is that all posts are anonymous; there is no need to register an account or choose a username in order to post (but you can still namefag).

Yotsuba engine
Closed source imageboard engine used by 4chan and 2chan. Kinda shit due to annoying captchas and lack of features that are more common in other engines, i.e. being able to post more than one image and being able to post images from your clipboard.

Vichan
One of the most popular imageboard engine as of 2022, open-source and used by soyjak.party along with many others. Good functionality and utility, good layout for posting so typing doesn't feel so cramped, and less bugs. Works best without captcha.

LynxChan
A modern imageboard engine used on KOHLCHAN and few other imageboards. Can be extensible but lacks a search feature.

Nanochan
A decent privacy focused engine, javascript isn't required to post. Popular with a few darknet altchans. Had some imageboard virgin drama associated with it but who the fuck cares. Use picochan alternatively. Open-source of course.

TinyIB
A small open-source imageboard mainly used on 1chan.net. A very basic script, but easy to set up.

Kokonotsuba
Open source imageboard software developed by KolymaNET and used on their imageboards. It supports rare features like TripMail, built-in emoticons, a dating feature, gemvoting, and some others.[1]. Was released to the public in 2023, had been proprietary prior to this.

1chan.net
Ancient train imageboard circa 2003. Was btfo'd one day by soyteens and lost decade old threads in a raid. Made in the Tinyib engine. ::Notable boards: N/A

The reincarnation of 8chan, /hebe/ included (it can't be posted to though). Allows tor posting (of course) and was once disputed to be the next soyteen bunker, until someone picked 9chan instead. Content is as you would expect: neo-nazism, inceldom, dogfucking, and pedophilia (not anymore) is:Uses LynxChan engine.

Site made by an egotistical kraut called Twoot who slaps his name on everything in the site. Even the rules page with 23 global rules has his signature, not to mention the entire constitution(yes, this shit is real) he made about his sub 24 post per hour altchan. Hell, there's even a timeline page for remembering all the important events(lol) of his imageboard. Uses the vichan engine. Seems to be down

l33t hax0rs imageboard with a focus on the late 90's anime Serial Experiments Lain. Famously has more staff than posters, bans and thread deletions for little to no reason are common since having fun breaks rule 3 and rule 4. Popular hangout spot for the obvious since it's a tech centered imageboard. Uses it's own unique lainchan engine forked from vichan.

dude weed lmao
Also used to have a tranny filled board named "/cd/ - Transgender Discussion" that was successfully raided by the 'Sharty once, and also has an wrestling board for some reason. Closed source engine. Has gone down rather recently, and might not be coming back.
Notable Boards: /w o o o/

Another Infinity Next 8chan clone, also full of dead boards, pedos and nazichads. Home of the /soyjak/ bunker which is (ironically) faster than any other board on the site.

(Was a) Popular German imageboard, know for creating CLASSIC memes like wojak[2] and a vn where you fuck children. Dead as of 2022 but was revived as Kohlchan. A new domain, krautchan.rip, is also available for all the oldchads tired of pedoshit.

Finnish imageboard whose users would raid Krautchan /int/ back in the day. Made memes like Spurdo Spärde, Apu Apustaja (shitty frog coal), etc. Has custom flags on its international board

Was a Shrek themed shitposting imageboard. It died in 2014 because the meme was getting old and the owner wanted to force pigs as a meme instead. Also because the owner didn't like how his imageboard turned into "shitposting and retarded jokes".[3]

Commonly compared to soyjak.party due to both of them being meme websites.