About the Soyjak Wiki 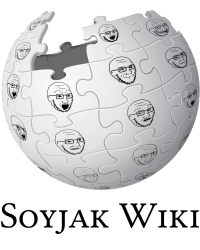 Soyjak Wiki is a community-driven knowledge base featuring independently fact-checked and peer-reviewed information about soyjaks, imageboard culture, and many other topics.

Soyjak Wiki was created by Soot, creator of popular imageboard soyjak.party, on March 29, 2021. It is currently owned by Angeleno.

The Soyjak Wiki has been used a source on KnowYourMeme [1] and wiki articles are frequently posted on 4chan. [2] [3]

The Soyjak Wiki is popular among teenagers with too much time on their hands. Often they stumble across the article on Classic Soyjak while searching for new Wojak memes on the internet.

Aside from the wiki's creator Soot, two other moderators used to work on the wiki: Syjck, creator of the SoyBooru, and -soyboywojak-, a frequent wiki contributor. Soot appointed Syjck to be moderator on June 12th 2021 following an edit war on the Colorfuljaks article. Later that day, Soot promoted -soyboywojak- to the same rank.

A little over a week later, Soot fired both of the Wiki's moderators. Syjck reportedly asked to be demoted, while -soyboywojak- was fired due to Soot's desire to "start fresh" regarding wiki moderation. [4] His new hiring strategy was explained in the text bar visible near the top of every board on the 'party: [5]

I have removed Syjck and -soyboywojak- from their wiki moderator positions. I would instead like to hear from the community about who should be made a mod. Please suggest potential mods in /suggest/.

Soon after dissolving the moderation team, Soot created a poll on Strawpoll.com to decide whether to reinstate -soyboywojak-. According to Soot, if the poll answered "no", he would "open a form" for potential moderators to apply. After receiving applications, he was then to open another poll with which Chuds could elect moderators from the list of applicants.

Please vote on this poll. It will help determine if -soyboywojak- is brought back as a moderator. If the results answer no, then I will open a form for those interested to apply, and I will open another poll to decide on which mod(s) to appoint.

It has been over a year since the -soyboywojak- reinstatement poll (which ended inconclusively due to VPNfagging) was created, and Soot has so far taken no further action.

After Angeleno acquired the wiki, users that were known not to be vandals were given the ability to quickly Rollback pages.

Soyjak Wiki's moderators were accused of silencing dissenting opinions and promoting a false narrative by some soyjak.party users. Moderator -soyboywojak- addressed these concerns in a thread on the /soy/ board of soyjak.party. [7]

Often users engage in vandalism and edit wars when an article expresses an opinion they disagree with, sometimes encompassing one thread and sometimes engulfing the entire site