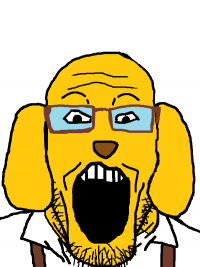 A janitor soyjak based on the Markiplier Soyjak

Janny is a derogatory nickname given to the janitors, a race of fun-hating transgender untermensch generally charged with the lowly and unnecessary task of moderating 4chan, as well as the name of a recently discovered brainworm parasite. However the phrase is also used for the moderation teams of other websites (such as Soyjak.party) as well.

This is often accompanied by phrases such as: "They do it for free" or "fuck niggers fuck jannies" to mock the tired, sexually frustrated individuals that moderate imageboards.

The original design of the "janny" comes from Mr. Morris, a character from the show "Arthur". Funposters have a long and well established tradition of making OC mocking the janitors. Among soyposters, this tradition has resulted in several soyjak variants. The large ears of the character also represent the ease at which the brain slugs enter the human mind.

As a species, Jannies are sluglike creatures that natively live in swampy areas. They are parasitic in nature, and they enter the brains of unsuspecting humans in order to puppet them. They then answer to a sort of hive mind, and seemingly are immediately added to the 4channel moderating team. The current reasons for this are unknown.

Many debate if all jannies are "trannies" but it is common belief that is true for the 41% of the 4chan Janitors. [1].

4chan jannies mostly dilate in /j/, as well as the 4chan IRC channel and Discord. 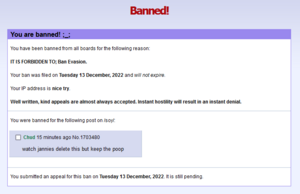 An example of jannies abusing their power. This teen got banned for evading even THOUGH he didn't.

Janitors often abuse their power in order to silence detractors. This happens on most websites.

As of January 2023 Soyjak.party has a vicious moderator who gives out permabans to anyone who disagrees with xer due to an insanely fragile ego, presumably from having a tiny penis.

Jannies love to feed on earwax, and if out of an ear canal, they also enjoy eating dirty socks.