Soyjak.party, also known as The Party, the 'Party, the 'arty, soy spinoff, soyfag.sharty, soyshart.farty, the 'sharty, and countless other names is an imageboard primarily dedicated to soyjak posting datamining. The party was founded by Soot, announced on /qa/ as "made a shitty imageboard" "basedjaks [sic] must be in every thread".[1] Despite the uncerimonious debut, the date was chosen in order to commemorate the 44th anniversary of the crash of Turkish Airlines Flight 452, of course.

The party has 13 boards, but the majority of its activity is on the soyjak board /soy/, which can get hundreds of posts every hour.[2] A VPN or can be used for privacy or ban evasion since public IPs are not banned from posting, though you will still be tracked thanks to (((SOOT))) formerly being a world leader in datamining technology.

The party has long struggled with Child Sexual Abuse Material being uploaded, and has even on several occassions caused the Soyjak.party to go down. [4] In turn, soot has done what he can to combat its spread. The primary uploaders of CSAM to the 'party are primarily unknown, but they commonly use kuz as a scapegoat to cover their tracks.[5]

Some potential suggestions are: The Cirno spammer, p#blm, and the raging swede. In reality though, it is obviously /bant/tranny. -niggers (like p#blm) unleashing these attacks, /bant/ also has a problem with CP spam much like the sharty.

Many schisms have formed in Soyjak.party's community over a diverse range of issues such as Islam, Soyjak variants, and Soot's oversight of the website.

After the Five Board Plan was implemented, and later slightly modified, Soyjak.party was consolidated into 14 boards: 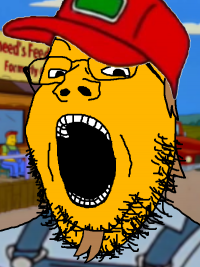 Aside from Soyjak.party itself, Kuz owns and runs several other datamining websites meant to supplement Soyjak.party.