Reddit is an academic discussions and content aggregation website on which many communities have been established to discuss and promote various topics. These communities are split into "subreddits", which are, generally speaking, each made to discuss single topics. Reddit is known for being the birthplace of many memes and being a bastion of intelligent debate and conversation international mass-brainwashing experiment aiming to manipulate public opinion. 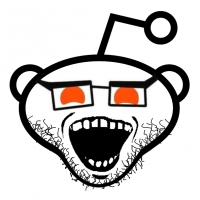 Reddit has a somewhat mixed opinion online in more mentally challenged online spaces such as 4chan, due to its highly homogenised and aggressively enforced left-wing intellectual bias [1] and its questionable decisions regarding censorship and hiring strategy [2]. When someone is perceived as exemplifying Reddit's more controversial qualities, some call it a "Reddit moment" for comedic purposes.

Reddit was too edgy back in the day, so online heroes under the banner "srs", for "shit reddit says", banded together to fight against the cancer that is free-speech. Many toxic subreddits were banned definitely because of srs and not because of the media, so reddit AMAer u/moot founded s4s/ as a 4chan counterpart.

Soyjaks are often portrayed as enjoying Reddit [3] and being frequent users of the site. This seems to be due to Reddit's politics and its often pop culture-centered content. Reddit is also home to r/soyjak.

Following the July 2020 arrest of Ghislaine Maxwell, daughter of media mogul Robert Maxwell, users sleuthed out that the account "maxwellhill", which after 14 years of daily activity suddenly stopped posting the day before Ghislaine's arrest, belonged to the famous Epstein collaborator. The account was one of the first made on Reddit in 2006, has held the highest karma count and currently holds the 10th highest karma count, was an extremely prominent moderator on r/worldnews, r/politics, r/news, r/technology and many other popular subreddits, was widely criticized for power abuse and spreading agendas, and often defended pedophilia. After this was discovered, Reddit moderators claimed maxwellhill had contacted them privately about the "misunderstanding" after Ghislaine's arrest, and posted clearly doctored screenshots of the supposed PMs. They claimed maxwellhill is a Malaysian male from "Maxwell Hill" (Bukit Larut), a claim which was easily and unequivocally debunked by looking at some of the user's past posts. The only popular media outlet to report on the matter was Vice (the articles of which maxwellhill frequently shared), which defined the "conspiracy theory" "incoherent", but failed to give a single reason for the label and did not confront any of the evidence. As of July 2022, u/maxwellhill still has not posted. Reddit has not responded to requests for comment.