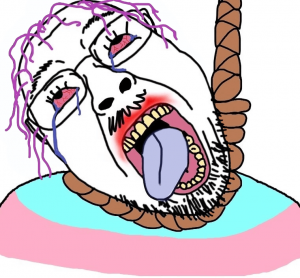 Trannies (also known as commiepedotroons, troons or hons) is a term used to refer to mentally ill people who believe they are the opposite sex than they really are. It commonly refers to women who think they are men, and men who think they are women; these examples are known as "binary" transgender people. All non-binary people are also inherently included under the term transgender, because their "gender" is made up and not their true sex.

Trannyjak is a modified version of Guinness World Record Soyjak from /pol/ based off the statistic that 41% of trans people attempt suicide.

You will never be a woman. You have no womb, you have no ovaries, you have no eggs. You are a homosexual man twisted by drugs and surgery into a crude mockery of nature’s perfection.

All the “validation” you get is two-faced and half-hearted. Behind your back people mock you. Your parents are disgusted and ashamed of you, your “friends” laugh at your ghoulish appearance behind closed doors.

Men are utterly repulsed by you. Thousands of years of evolution have allowed men to sniff out frauds with incredible efficiency. Even trannies who “pass” look uncanny and unnatural to a man. Your bone structure is a dead giveaway. And even if you manage to get a drunk guy home with you, he’ll turn tail and bolt the second he gets a whiff of your diseased, infected axe wound.

You will never be happy. You wrench out a fake smile every single morning and tell yourself it’s going to be ok, but deep inside you feel the depression creeping up like a weed, ready to crush you under the unbearable weight.

Eventually it’ll be too much to bear - you’ll buy a rope, tie a noose, put it around your neck, and plunge into the cold abyss. Your parents will find you, heartbroken but relieved that they no longer have to live with the unbearable shame and disappointment. They’ll bury you with a headstone marked with your birth name, and every passerby for the rest of eternity will know a man is buried there. Your body will decay and go back to the dust, and all that will remain of your legacy is a skeleton that is unmistakably male.

This is your fate. This is what you chose. There is no turning back.