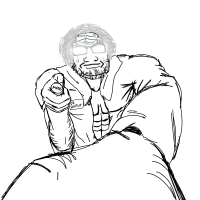 Dr. Soystein about to force meds down a patient's throat.

Dr. Soystein is a psychiatrist that was employed at the Mental Asylum.

According to old records, Soystein was impoverished and joined the asylum's staff with interest in money. He was mentored by dr. Soyberg, a renowned psychiatrist. It is rumored that Soyberg used his money to get Soystein to do whatever he wanted, but there's no evidence. 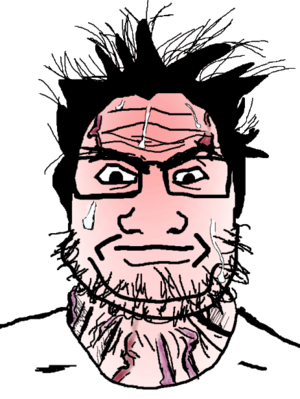 Soystein after his first day of work as a psychiatrist.

Even though he joined the Asylum for such a purpose he still never gave up in attempting to rid schizos of schizophrenia even when his methods were less orthodox than Dr. Soyberg.

It is written that Soystein mostly just insulted his patients in attempt to get them to take meds, having a short temper by himself he wasn't as successful as Soyberg.

Before the coup, Soystein wasn't as strong as he is now, evidenced by a recently discovered image file of him before his fit transformation. 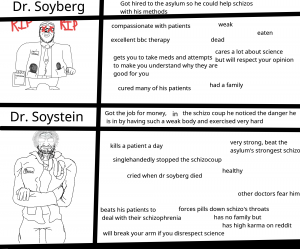 Some of these claims are dubious

It appears that they were not only close co-workers but also close friends given Soystein cried when Soyberg died in the Schizo-Coup.[1]

At the Schizo-Coup[edit | edit source]

When Soystein saw his friend get killed and eaten, combined with the death of many doctors and rape of many nurses, Soystein noticed that this is a world where only the strong prevail. His hair quickly turned gray, he locked himself in his room and did a lot of exercise without rest until he was strong enough. It's unknown how Soystein got so strong in such a matter of time and it's scientifically impossible for a human to become that strong, even with these questions no doctor wants to attempt to capture Soystein and research his body. 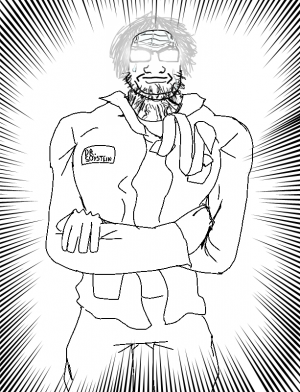 It's also theorized that Soystein implanted a bit of GigaChad's genome into his circulatory system after exercising but there is no evidence for this claim.

According to the surviving soldiers that attempted to stop the Schizo Coup, they were being obliterated by the schizos because bullets wouldn't even hurt some of them, but Soystein came and happened to save their lives many times until they were off duty.

It's also claimed that Soystein beat the asylum's strongest schizo. This rumor just might be true. If that were to be the case, then Soystein is almost invincible.

Soystein successfuly stopped the Schizo Coup and put the schizos back into their cells. 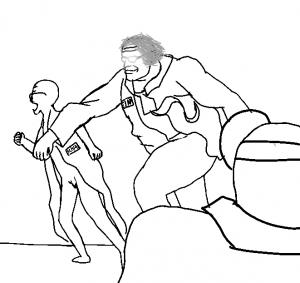 Soystein beating a patient that refused to take his meds in front of another doctor.

After the event, Soystein went back to his psychiatry shift, although much has changed, Soystein began being extremely agressive with patients and even killed a couple of them due to his strength, leading some other doctors like Dr Soyowad to kill patients as well.

As time went on, Soystein got a less violent and aggressive with his patients and less complaints of his behavior were sent. People think he's slowly attempting to follow under the now deceased Dr Soyberg's footsteps.

Soystein calmly giving the meds receipt to a female patient