From Soyjak Wiki
Jump to navigationJump to search
For the patient file check Thoughjak (Patient).

Thoughjak is a soyjak variation though. He is best known for using the word "though", especially at the end of his sentences though. 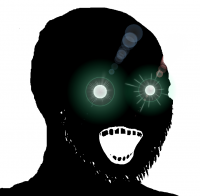 Thoughjak is a normal soyjak with a distinctive black color, a white mouth, and glowing, light green eyes though. Thoughjak lacks the glasses of the normal soyjak though. You can turn most non colored soyjaks into thoughjaks by inverting their colors and then adding lens flares on their eyes though.

Thoughjak is most often used when a post includes the word "though", especially at the end of a sentence though. Variations of "though" such as "tho" and "doe" are also sometimes quoted with a thoughjak though.

The Doedoe was developed on /soy/ around the time that Buck Breaking became popular. It is a doe (female deer) with a thougher's glowing eyes and open mouth. The name "Doedoe" is a pun on "though doe" or "doe, though".