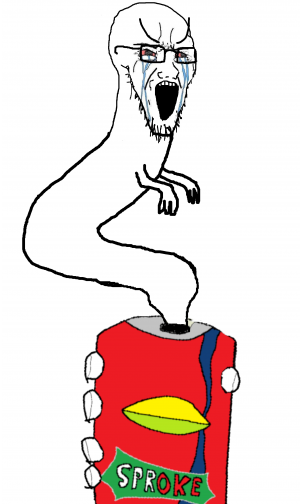 Pictured: Sprokeling. A a creature that is spontaneously generated inside any empty Sproke can previously consumed by Sprokejak. It is believed to be the larval form of Sprokejak, but it is not yet confirmed.

Description: Sprokejak is a unique variant of soyjak with an abnormally large mouth even for soyjak standards. It has a long serpentine body and is capable of swallowing a human being whole. Sprokejak has small vestigial arms that exist primarily to open it's own massive maw and shovel nutrients into it's mouth. Sprokejak's diet consists primarily of Sproke and human flesh. It is believed that Sprokejak once had a sizeable cult of worshippers, but they have long since been consumed by their own deity. Sprokejak has since gone into hibernation deep underground in a massive subterranean lake of Sproke. It is prophesied that Sprokejak's awakening will culminate an apocalyptic human extinction level event which will turn the world's oceans into Sproke and result in the extinction of 90% of life on Earth. Dr. Soyberg and his associates have sent an expedition to Sprokejak's underground chamber to learn more about the threat. Armed with powerful schizo meds, they hope to delay his inevitable awakening.

>This man's name is sprokejak, he likes Sprite/coke mixed together in a 60/40 ratio, but not separately. You WILL follow his commands, or you WILL suffer the consequences. -exerpt from the Sproke Sea Scrolls.

Fragments of holy text from the Sproke cult known as the Sproke Sea Scrolls have been found in Sprokejak's lair, littered among bone fragments and knee-deep in toxic Sproke:

>You cannot stop it now. The Sproke surge is upon us all. Sproke will spill forth like a mighty tidal wave and destroy everything you've ever cherished. In the end, there will only be Sproke. And you will like it.