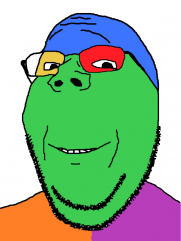 An example of a Colorjak. This is one of the only variants; most Colorjaks are based on this one.

Colorjaks (also known as "Colourjaks"[1] in UK English) are a Soyjak variant that originated on soyjak.party. They are simply regular soyjaks filled-in with bright colors and are most commonly based on Wholesome Soyjak. Some posters believe that colorjaks are coal, while others say they're gems. Colorjaks have sometimes been posted in large quantities, many of them with little variation, which has caused some posters to dismiss them as instruments of spam. Colorjaks took on their current identity somewhere around June 10th, 2021, before which they were used to represent autism. [2]

Colorjaks spawned a new soyjak variation made in retaliation against Colorjaks, Anti-colorjaks. These 'jaks are simply Colorjaks with a black and white filter applied.

The battle between monochrome and colorful[edit | edit source]

On June 10, a large amount of spam threads were created to purposely wipe the catalogue of /soy/. Most of these new threads weren't Colorjaks, however during this attack on /soy/, a large amount of Colorjak threads were necrobumped, causing some posters to express their dislike towards colorak posting. This spiraled into a conflict between "Monochrome" (a pro-Colorful term for regular soyjaks) 'jaks and Colorjaks which filled the catalog but only lasted a couple of hours.

For the delusional, schizophrenic distortion of history claimed by some Chuds to be the truth on OBB, see: Operation Bleached Bowl

Operation Bleached Bowl (OBB) is a term originated by users opposed to Colorjaks used to describe the moderation strategy of soyjak.party's moderators on June 10th, during a wave of heavy Colorjak posting. The term arose from the moderators' hostility toward scat posting, which took place in the replies of many Colorjak threads. OBB truthers saw the moderators' strategy as biased against both scat posting and threads alluding in any way to OBB or scat, which were deleted from /soy/ despite neither breaking any rules nor being any lower quality than many of the Colorjak threads, which remained up. Disturbingly, the furry porn that was also posted during the debacle remained un-deleted for significantly longer than the scat content.

Despite being highly active in cracking down on posts during the Colorjak/scat battle, Soot and other moderators remained completely silent on any thread containing OBB allegations.

OBB truthers also allege that after the OBB incident, mods engaged in a psyop/cover-up and wrongfully asserted that threads were being made with scat in the OP, when in reality (according to OBB truthers), scat was only being used to reply to Colorjaks and no scat threads were created.