Picrew (ピクルー) is a Japanese image maker web service that is mainly used for making avatars. The site allows anyone to upload presets so others can design images based on the presets uploaded.

Although the website is infamous because several actual trannies from discord and twitter have made several of their cringe pfps in here, there is a soyjak generator on that site known as Gemsmither that was made by a 'party user on July 2nd, 2022, the generator has dozens of unique accessories and it can be used to create 239,580,000 unique soyjaks. 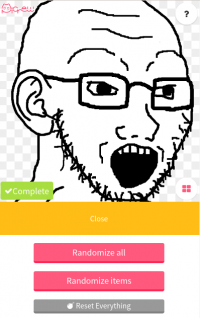 Picrew has a Japanese interface, although English speakers can use it easily. The dice button is used for creating random 'jaks. You can select:

The Picrew Gemsmither received a mixed reception on the party, while some praised it for its vast capabilities in making gems instantly, others criticized it because it made making low-effort soyjaks easier than before, and the edits were soulless compared to standard 'jaks made using normal editing software, with some even calling it as "Coalsmither". The 'jaks made using the Gemsmither also suffer from a cropped head, although some consider this a plus to distinguish Picrew soyjaks from the handmade normal ones.

The Picrew thread was stickied on soyjak.party's /soy/ board for one day.[1]