Froge is a NAS Dave and Bambi OC that was created by m1nty. On the sharty, Froge is a forced meme that would commonly be posted on frogposts, with the intention of derailing their threads.

It is mandatory to post drawn ejaculating dicks every time she gets posted.

Recently, there is a trend that consists on shipping Froge and Dilbert (a character starring in a comic strip and tv show of the same name). The relationship or connection between both characters is actually non-existent, though (plus it's forced by only one person).

Some rogue faggots started putting stealthy toads in jaks in order to get a response from Frogefags in a Lee-esque fashion. This continued for a day until a mod eventually asked Frogefags to only post in /qa/ and /incel/, effectively banning the meme from /soy/. This prompted the 'a Frogeposter' to write a goodbye message (which was actually just Leusick's "This is the end" video) in the board, only for it to be moved to /incel/ and then eventually deleted.

caught in a bad bromance 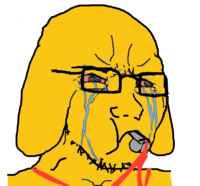 >IS THAT FUCKING FR*GE NO STOP YOU'RE HECKIN BANNED!!!

Jannies are absolutely obsessed with froge to the point that jannies will put froge posts on priority and will wipe them off the 'log within minutes, unlike coal, or nas.

On December 4, 2022, a random soyteen made a drawing in Paint 3D in an attempt to mimic Froge's art style[2]. This character does not look in any way similar to Froge, and looks like a 3d model made by a roblox kid. This abomination and mockery of true art was created in an attempt to create a boyfriend for Froge and farm (You)s. He is said to have a BWP. The name Bobe comes from the first reply, as it sounds similar to froge. Bobe's models and textures can be found here.