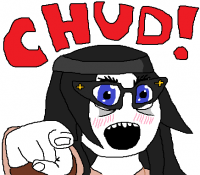 Soy-tan is the former official mascot of soyjak.party. She is featured in comics, fanart and other content created by soyteens. Soy-tan was first seen in September of 2020, the early drawings of the character probably created by a Brazilian (BR win). Soy-tan was featured as the soyjak.party favicon and as the image in pinned threads, until shortly after Kuz's purchase. 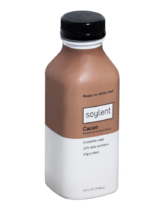 Soytan is a moe anthropomorph of the cacao soylent bottle. She has long black hair and brown baggy ("nerdy") clothes, wears over-the-top stereotypical "nerdy girl" glasses, and is often depicted as participating in "soy" activities such as playing Nintendo switch.

Some claim Soytan to be the female version of Soyjak. Another theory is that Soytan is Soot's genderswapped depiction of himself and that it was made by him (despite that there are ZERO peer reviewed studies proving this, no known pictures of Soot irl, and that Soytan was made by an Brazilian). This theory originates from the trend of other site owners doing this; both Kuz and Moot are known to have depiected themselves as anime girls in the past, and both of them eventually came to realize how cringe it was.

(Fig. 1) Kuz depicting himself as a kawaii anime girl.

(Fig. 2) Moot depicting himself as a kawaii anime girl.

Because soytan is a female kawaii mascot with Japanese inspiration, soyjak experts consider it to be Manime. Leading soyjakers agree that only reason soytan hasn't been forgotten is because of all of OCs made by soyjakkers. If all the OCs and edits did not exist, the soytan meme would been unrightfully considered as a /s4s/ garbage coal nigger meme. In summary, soytan is gem because it is:

Also because of his refusal to delete the board /a/, soyjak historians have taken the existence of soytan as evidence that Soot is a chad.

Even though he never explicitly stated that soytan was no longer the mascot of the party, kuz took down soytans sticky thread and changed the sites icon to Impish Soyak Ears shortly after assuming power.